Sixteen hours to Jaipur, sleeper class, I lie on the upper berth of a crowded train, my arm suspended at head level like a crane. I easily grasp onto passing soft drinks, samosas, or the heads of children with sticky fingers. Outside the train, the sunset is straddling the horizon. I see rice fields and farms, a line of trees, electrical towers that look like steel angels in the dark.

The first night in Jaipur, the capital of Rajastan, a fuse blows at my five dollar hotel. We move to another room and that fuse blows out. The next day we relocate to another hotel for three dollars a night. It is ridden with ants, spiders, pleas, mosquitos, cockroaches. The mattress is a cot on wooden planks. It reminds me of living in Las Vegas. We wake up with new places to scratch. This is called Budget Travel.

On the street, past midnight, I feed a cow rotis. A man in a white turban and thick mustache takes my hand, says: “Good luck feed cow.”

“You no feed street children. No good luck. Only feed cow. Cow is God. Not feed children. Feed cow.”

I feed God another Roti. 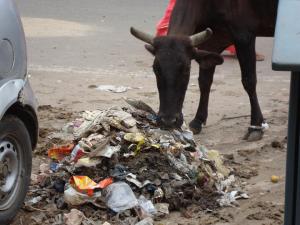 I read Arundhati Roy, writing about India in 2001: “More than 400 million of our people are illiterate and live in absolute poverty, over 600 million lack even basic sanitation and over 200 million have no drinking water.” She tells me there]s no such thing as an authentic Indian. She tells me that every Indian is a minority. She tells me that if you look hard enough, you can find Coca Cola in the Vedas. She seems to greatly dislike Indira Ghandi.

I am very grateful to be traveling around India with a woman, without her many idiosyncrasies would be lost. Everywhere, men follow her, with their eyes, their steps, their hands, and occasionally, with their lips, though none have been reciprocated for their desire. In the Guide it warns that “Indians are known for harassing women in Western style clothing”. This begs the question of what the guide means when it says “harassing.”

It means men asking you for kisses, asking how many people you fuck and whether you use condoms or not. It means obscene stares from the young men around you and being followed by gangs of them while walking home at night. It means always being served last at restaurants. It means that when you order beer the waiter assumes you are only doing it for the men in the room. It means constant whistles, taunts, and arms and hands “accidentally” falling upon different parts of your skin. It means men standing near you with such propinquity as to peak down any portion of your body where the distance between the fabric and your skin might reveal the curve of a breast or thigh.

It also means getting to stand in separate, shorter, faster lines.

A Tuk Tuk driver drives drunk. The other drivers hate him; they attempt to run us off the road. He swears at them in English, in Hindi, in Spanish, calls them charlatans. His name is John Travolta. We visit a temple full of monkeys. The Hindu priests call it the Sun Temple, the touts call it the Monkey Temple. On the way are cobras, goats, cattle, monkeys. Again, they attack me: 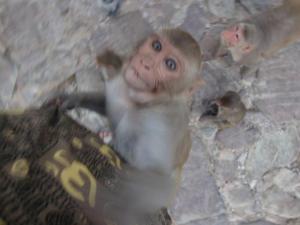 Jaipur is a destination with a great observatory, humongous forts, the largest canon in the world, the greatest collection of silver objects, rare and precious stones, a rich cultural history of Kings, epic battles and reformist laws, an old city completely bathed in pink paint, and a gaudy theater house.

At a bar a man named Christopher delivers a jeremiad against Indian employment. He is a well off businessman, frustrated with the “chai culture” of Indian entrepreneurs. “What takes a day in the U.S. takes a week in Mexico, takes a month in Vietnam, takes a year in India.” Apparently he owns manufacturing companies throughout the third world. He tells me the venal labor laws in India disallow him from firing his workers when they do not show up for work, or when they harass his female workers, or when they deliver shipments incredibly late.

Rich, he buys all our drinks.

India is still consistently India. And Jaipur is a city full of Gods, Kings, monkeys, and street children. They work in groups, perhaps. I give rupees whenever I see Mani, a fifteen year old with a baby covered in flies. I like her because she always takes my money and never asks for more. She takes food when I buy it for her. The street children just take the food I buy for them and then toss obscene gestures at me that say in so many words: “fuck you, cheap America!”. Mani gets it, so I always give her money. This is called selfish giving. 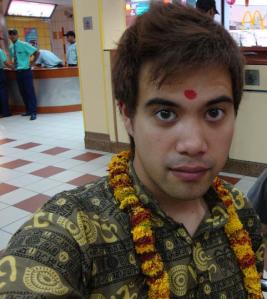 All hail the priest of the Micee D's